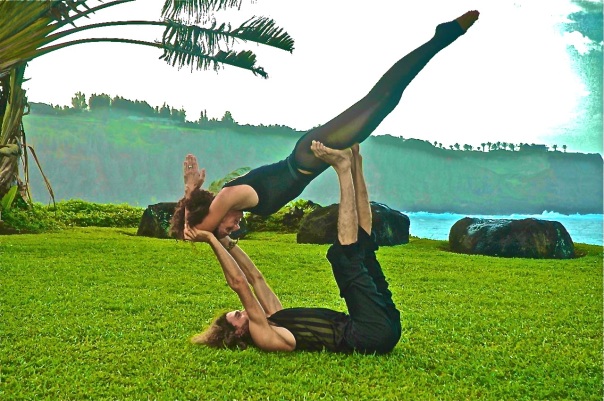 “There are two lasting bequests we can give our children:
One is roots, the other is wings.”

There’s a new a new yoga craze sweeping the nation: Acro-Yoga (which we call “Flying Yoga” — see below). Actually, this style of yoga has officially been around for nearly a decade or more already (click HERE for more), but it’s only in the last few years or so that it’s really taken off. Before that, it was known in yoga circles, but no one had yet made it into its own unique, identifiable, trademarked brand of yoga. In reality, it’s probably a pretty ancient practice, maybe as old as the circus (not to mention something that mommies and daddies do with their kids all the time!) In the world of yoga, it’s at least as old as the 1930s when the “godfather” of modern yoga, TVK Krishnamacharya, taught it to his students, who did public, circus-like yoga demonstrations to advertise the power of yoga to the world. Here’s a link to a Youtube video showing the master and his students practicing this form of yoga:

So why did it take so long for this type of yoga to catch on, one might wonder? It’s so fun, everyone seems to love it. Well, I would suggest it’s at least partly because there has been some lightening up and loosening of boundaries in the yoga world, and this is probably a good thing. It also seems that when something gets trademarked, branded, and made into a system, there’s much more of a chance of it really becoming an identifiable entity in its own right, a household term.

Before I go on, let me just say a little something about the name for this kind of yoga, and why I do not use the term “Acro-Yoga.”

Personally, I prefer the designation “Flying Yoga” not only because I have never officially been trained in “Acro,” but because it sounds too much like we’re doing circus tricks. This isn’t any put down of the founders of Acro, Jason Nemer and Jenny Klein. No, they are well grounded in the yoga tradition, and they also acknowledge that when we are doing any kind of yoga, it’s really the inner work being done — the qualities of courage, trust, perserverance, patience, listening, etc. — that are really the most important, not necessarily what we can do. On the other hand, when we see a pose artfully done, or a move gracefully executed, we generally give props because we know what it must have taken to get there (however many incarnations — in this lifetime, or ones before!)

I prefer the term “Flying Yoga” because we do really fly high when we do this kind of yoga, it’s so much fun, and even blissful (more below on this). On the other hand, perhaps the designation “Roots & Wings” would be even better, to highlight the fact that in order for one person to fly (the “Flyer”), the person who is assisting (the “Base”) must be really very well grounded to make it all possible! As it is with every “flight” we take in life — we won’t be airborne for long if we don’t have a stable foundation to support it!

Although I have been practicing yoga for the past 19 years, admittedly it is really only in the last 5 that I have gotten into Flying Yoga. Early on, I found a great partner in crime, my friend Ali Gardella (who also assists with our Yoga Teacher Trainings). People see us now and are fairly amazed at what we can do, but little do they know that Ali had to take many a one for the team to get to where we are now. Yes, she ate sand numerous times on the beach here in Naples as we were learning how to do our flying stunts. Ali, a grandmother of 2 has been a super flying trooper, always ready to try new things and No one would ever suspect that she is a grandmother! 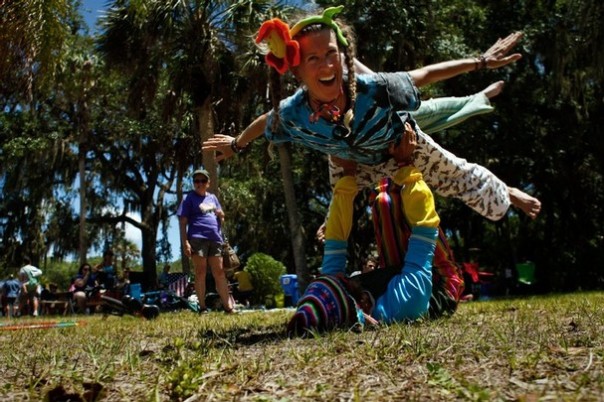 Ali also knows how fun it is! And yoga of all things should have at least a little fun to balance out the discipline!

So anyway, you can thank Ali when I take you without a hitch from “Folded Leaf” into the “Bat Pose,” or have you stand and balance on my hands, etc.

More recently, I have begun “flying” with another truly amazing yogini, Meenakshi Angel Honig, who has been practicing and teaching yoga for the past 4 decades, currently residing at the Spirit of Aloha on Maui. Angel is an internationally acclaimed yoga teacher with so much wisdom to share! It is a great honor for me to work together with her and we are really so blessed to have her joining us on the teaching staff of our yoga program at the Spirit of Aloha.

I would also like to highlight one intriguing element in our working together: The fact that Angel actually experiences Kundalini Shakti through practicing Flying Yoga, which is why she calls it “The Yoga of Bliss.” She feels it has to do with the energy being released by pressure of the Base’s feet against the sacrum. [This makes perfect sense to me. Yesterday at Earth Day I spoke with a woman who believes her recent spontaneous kundalini awakening was directly related to her hooping practice, specifically by the pressure of the hoop against her sacrum.]

Angel and I have already choreographed 2 Flying Yoga “peaces” (as Angel calls them), and I have posted the Youtube videos of these below. The first is a piece set to Josh Groban’s version of “You Raise Me Up,” which Angel chose as a perfect soundtrack for Flying Yoga.  I think you’ll agree it’s not bad at all for our first month working together, and somewhat sporadically at that:

The second “peace” Angel and I co-created is a Flying Yoga tribute to Whitney Houston, using her incredibly beautiful song from The Bodyguard, “I Will Always Love You.”

And here are two other “peaces” that Angel and I have created more recently for your viewing pleasure:

I feel really good about the work that Angel and I have done together, mainly because for me it fulfills something that I have for a long time now wanted to do with my asana practice, which is to turn it into a work of art, expressing, as Rodney Yee has put it, the “Poetry of the Body.” And that is is just its outward expression, of course. Asana’s inward expression is greater awareness and self-knowledge, health, bliss, peace, freedom, and love of life. May it be so for us all!

For a nice piece on Jason & Jenny and Acro Yoga, click HERE: